Wetroom
in a Box

For every floor
an i-Drain®

All benefits
of I-Drain in a glance

The I-DRAIN® shower channel has a unique adhesion system, developed on the basis of many years of experience and extensive know-how.
During production at the factory, the waterproofing membrane is bonded to the shower channel with a patented and 100% waterproof adhesion. The fabric-to-fabric adhesive ensures the 100% watertightness of an entire shower area.

The I-DRAIN® waterproofing membrane has been extensively tested and meets the highest standards.
A 25-year manufacturer’s warranty is therefore offered for the watertightness of the adhesion between the membrane and the drain. Another advantage for installers as well as consumers!

We apply a stringent policy of using only high quality and durable materials of the in the production of the I-DRAIN® shower channels and accessories.

The drain body of the I-DRAIN® AIO and the AIO siphon are made of ABS. This ensures the long life span and chemical resistance that are ideal for this application.

The I-DRAIN® PRO Linear stainless steel drains are deep-drawn in one piece. They therefore contain no welds and can be cleaned easily.
The drain body of the I-DRAIN® PRO Tile is made of Solid Surface. With a totally impermeable surface, it offers resistance to various physical influences. This material is therefore extremely suitable for interiors in which hygiene and clean design are important.
The I-DRAIN® PRO siphon is made of chemically resistant PP (polypropylene). Thus the siphon is not only anti-bacterial, but also heat and corrosion resistant.

The I-DRAIN® LIQUID and I-DRAIN® Square series are deep-drawn from stainless steel in one piece and the grating is made from Solid Surface.

The installation advantage of I-DRAIN® is that: the slope/incline only has to be fitted in one direction. Thus the tiles can be mounted quickly and easily. The adjustable grating can be adjusted according to the thickness of the tile.

Using the elevation blocks, you can adjust the height of the grating according to the thickness of the tile. This can vary between 3 mm and 30 mm. During the installation you do not need to know the thickness of your tile as the grating can be adjusted afterwards. The tile frame ensures an accurate, safe and aesthetically pleasing finish of the chosen tiles.

The polypropylene I-DRAIN® PRO siphon offers numerous advantages. This material is dirt resistant and antibacterial. The siphon is directly accessible under the decorative grating and can be opened easily. A particularly convenient feature is that hair and dirt come off with the lid when it is lifted. Finally, you can easily clean the inside of the siphon and retain access to your plumbing. 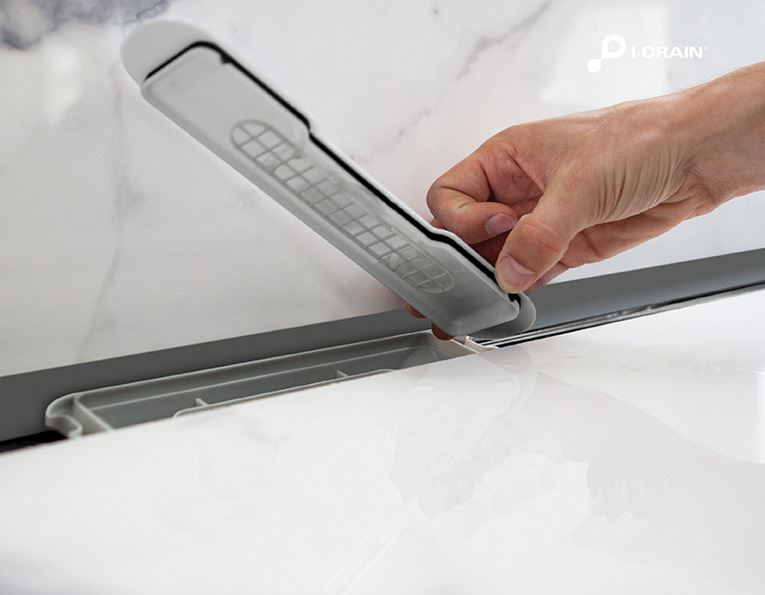 With its minimum built-in height, the I-DRAIN® nevertheless has a very large capacity to drain water. The table below provides a summary of this.

The I-Buddy is the ideal aid for installing the I-DRAIN®.

Have you selected a bathroom drain system without a waterproof top layer? If so, the surface water as well as the water that seeps into the channel is drained away. Such installations generally make use of waterproofing membranes or liquid rubbers. The most common of these is a tiled shower consisting of tiles and joints.

Fact: were you aware that a joint is only 80% waterproof?

This means that 20% of the water that falls on the joints permeates the joint and penetrates underneath the tiles and the waterproofing mat. And if the joints are damaged or worn, that percentage is much higher.

A Double Drain System is not a second siphon. The function of a siphon is only to cut off unpleasant smells. Which is why it is often referred to as an odour trap.

With the I-DRAIN® DDS system, both the water that falls on the tiles and the water that permeates through the joints and is captured by the waterproof mat is directed to the drain. (1) 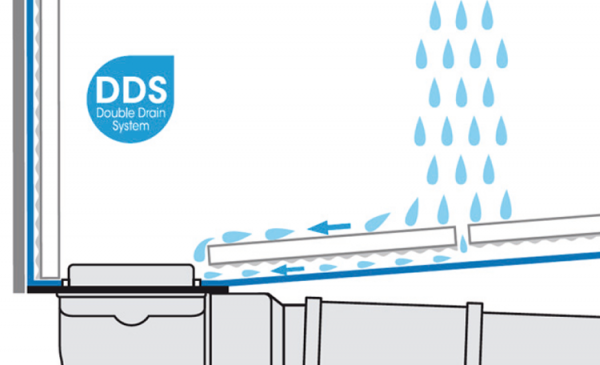